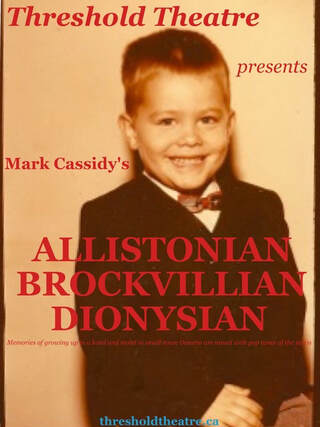 Presented by
Threshold Theatre
Every old town in Ontario has one on its main drag.  The hotel.  A historic building whose charm has been reincarnated--or not.  I spent part of my childhood in one of those.  Follow the highway out of the small town, and before long you'll pass a roadside motel.  I spent my adolescence in one of those.   Allistonian Brockvillian Dionysian, is a memoir about growing up in a small town Ontario hotel and motel.  This show has been presented in workshop form at various venues in Toronto, Guelph, Peterborough and Kingston.  ABD is written & performed by Mark Cassidy, directed by Hume Baugh

Music, memory and Molson Golden infuse this hilarious and heartwarming piece about coming of age in a hotel & motel in small town Ontario.

Mark Cassidy has a reputation for creating adventurous, thought-provoking theatre. As co-artistic director of Threshold Theatre, Mark has devised and directed a number of innovative projects including, As I Lay Dying, Beautiful Losers, Howl, Forms of Devotion, Terror, and Kafka and Son. Mark has also been a collaborator on new work with many independent  artists and companies including, Subtle Vigilance Collective, Amir Al-Azraki, Nomanzland, Platform 9, Optic Heart, El Destino, Puppetmongers, Shadowland, Te Amim, and DMT Productions. Upcoming pieces include:  Late Nights with Mark the C. and I Make the Weather. Mark has been nominated for two Dora Awards for Outstanding Direction, and the Siminovitch Prize for Excellence in Theatre Directing

Hume Baugh has directed Shakespeare's All's Well That Ends Well for Alchemy Theatre, Twelfth Night for Gromkat/Direct Flight, and The Winter's Tale at Fanshawe College. He directed Bobby del Rio's Child Hood at Summerworks, Adam Pettle's Therac 25 for Direct Flight, and Cecilia McHugh's Rising Below the Sun at TPM Backspace. Other credits include Stuart O'Connell's The Greatest Love Story Ever Forgotten at the Toronto Fringe, Michel Tremblay's La Duchesse de Langeais at the Orlando Fringe, and Brecht's Drums in the Night and Steinbeck's Of Mice and Men at Fanshawe College. Are you ready to be transported on an exciting, thrilling, miraculous, journey? This summer Blue Canoe is “Sharing Stories” and taking Kingston families on an exciting storytelling adventure. In this show designed specifically for families and young people, we are exploring what it means to search for hope in times of uncertainty.  Join us for music, puppets, dancing, and beautiful stories!

LOVE IN THE FIRST DEGREE

Love in the first degree 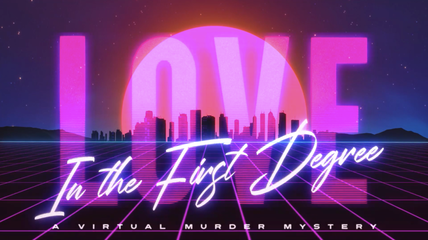 Presented by
6 AM Productions
Judge & Jury:
Love in the First Degree - A Virtual Murder Mystery

Jesse Welsh was living his best life in 1987, set to marry the love of his life - Samantha Smith. Moments after toasting to their love during the reception, he took a sip of his whisky, and collapsed to the ground... dead.
8 guests from the wedding are taken aside and split up for interrogation, with hopes of rooting out the murderer before the police arrive, who are sure to bungle the investigation. 8 live actors, 1 murder, in 1 virtual mansion.
‍
In this 1980's-themed fully virtual Murder Mystery, teams are split into smaller breakout 'tables' of 8-10 and tasked with interrogating the suspects in real-time;  Cross-examining their alibis over 3 rounds of live interaction before ultimately submitting their best guess for both the Murderer and the Motive. Who will be proven innocent? Who will be found guilty? Will the murderer be brought to justice?
​ Only you can decide!
​ 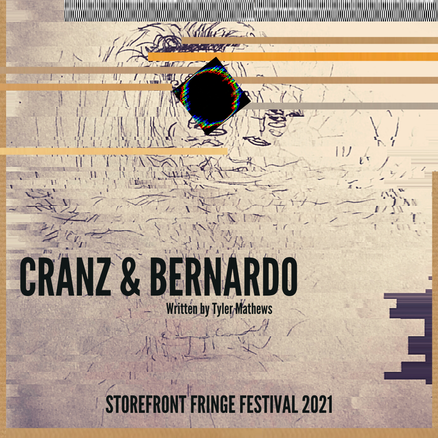 Presented by
STUDIO O13
Cranz and Bernardo are trapped inside a cardboard box. Their task: to solve the mysterious algorithm scrawled on the walls around them. As time runs out they cling to, care for and abuse the only hope they have left -- each other.
Starring Douglas Connors, Brennan Michener and Nathan Yee, "Cranz & Bernardo" explores the absurdity of life, death and violence in the vein of Beckett and Pinter. 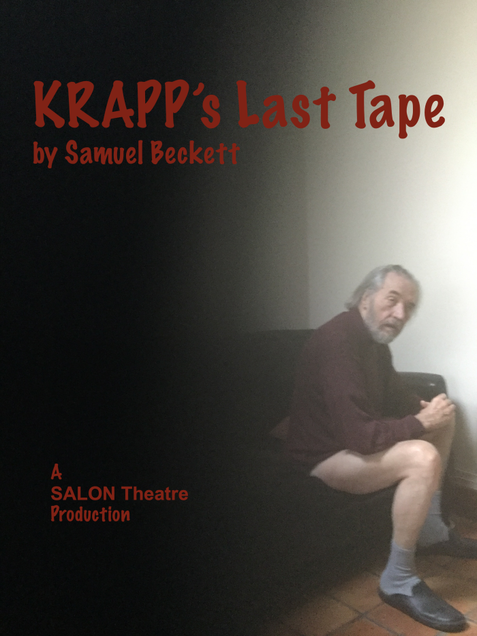 Presented by
SALON Theatre
SALONTheatre was born in 1981 as an after-show performance bar for artists visiting the Toronto International Theatre Festival. From 1983 - 1987, SALON was resident theatre company at Queen Street West’s The Great Hall. In Kingston, SALON partnered with The Grand Theatre to produce the Kingston Summer Festival (1993 - 1999), with Theatre Kingston to produce The King’s Conscience (2009). and, independently, the John A. Macdonald Festival (2010 - 2015). SALON makes playpens—environments within which trained and talented theatre artists are invited to pursue their dreams.

KRAPP’S LAST TAPE is, of course, a groundbreaking classic by Samuel Becket--one of the greatest solo shows ever written for the stage. Jim Garrard, long-time artistic director of SALON Theatre, has imagined himself in the role ever since he first saw it in 1964, at Queen’s, performed by Heiner Piller, directed by Fred Euringer. Jim’s good friend— the late and great Bob Nasmith—performed the piece to great acclaim at Theatre Passe Muraille not long before he died. SALON’s production is dedicated to his memory.

Jim Garrard trained as an actor at Queen’s University Drama Department and London Academy of Music and Dramatic Art (LAMDA). He self-identifies as a playwright, although during the past 60 years he has acted, directed, managed, administered, marketed, fund-raised in aid of numerous theatre, film and arts funding enterprises. Jim is founding Artistic Director of Theatre Passe Muraille and SALONTheatre, former Executive Director of Toronto Arts Council, and King of Rochdale College.
​