Everyone is the sum total of past experiences. A character doesn't just spring to life at age 30. - Kelley Armstrong

And neither does a Theatre Company – Rosemary Doyle, Artist Director, Theatre Kingston

2021/2022 is Theatre Kingston's 30th Season and so we would like to celebrate by inviting you back to the Theatre with a full season of LIVE! IN PERSON! SHOWS! 3 main stage shows, 2 Tett specials and next years Fringe! WECOME BACK!
​
WE SPEAK  is based on Monologues written by 21 Kingston Playwrights during our "I Speak" festival and features the works of 12 of those playwrights from and writing about Kington. These intertwining voices will shock and delight you with each of their takes on this place that we call home. Starring an all Kingston Cast: Selina Charelli, Johnny Jordon, Anne-Sophie Grenier, Ryan Clement, Tim Fort, Abigail Wolfe and Helen Bretzke. And Featuring the work of John Lazarus, Valerie Winslow, Anne- Sophie Grenier, Jim Garrard, Jane Shields, Christine Overall, Aida Sulcs, Amy Cadman, Rysia Andrade, Kelly Dear, Cliff Saunders, Elizabeth Saunders and Dramaturged by Rosemary Doyle.  Tett Centre from Sept 16th - Oct 3rd

THE SYLVIA EFFECT is written and directed by Peter Hinton. Using Sylvia Plath and her poems as inspiration, this play speaks to the emotional confessions of four characters simply named: The Daughter, The Poet, The Mother, and The Son.
"Sylvia Plath became famous, partly because of the manner of her death. But as often the case with artistic success it was also a case of timing. Writing against time. This relationship to time, makes her an ideal subject for the theatre. The challenge for me is to get past the tragic story to whatever core of experience or truth might wait on the other side.  Starring Katherine Gauthier, Ben Sanders, Margaret LaMarre and Rosemary Doyle.  Baby Grand Oct 27 - Nov 14 2021

JOHN D. HUSTON PRESENTS CHARLES DICKENS A CHRISTMAS CAROL. December 19th, Dec 20th 4:30pm and 8pm at THE TETT CENTRE For the past 30 Decembers, veteran solo performer, John D. Huston has packed his trunk, grown his beard and trundled off to towns and cities recreating the tours and performances of Victorian author, Charles Dickens to full houses and standing ovations.This is his 4th year with Theatre Kingston.
MERCY In an out-of-the-way dive bar, Jordan meets with Katherine to hire her to seduce Jordan's Husband. What unfolds is an explosive play about power and class, sex and betrayal, compromise and redemption. Exciting twists, multiple deceptions, this is a power game of cat-and-mouse. But who's the cat and who's the mouse? Mercy proves once again that our vulnerabilities not only define us, but occasionally save us. Starring Helen Bretzke and Tracey Guptill. Baby Grand Feb 10 - Feb 27 2022

MERCY by Drew Carnwath, Directed by Rosemary Doyle and Starring Helen Bretzke and Tracey Guptill, Designed by Clelia Scala will be Theatre KIngston's second World Premier of the Season. A high powered Lawyer meeting with a high paid sexworker.  If Mercy is ‘about’ anything, it is about performance and role-playing – in court, in bed, and on stage. It is only when we stop the role-playing, put down the masks and the armour, that we can truly see ourselves in others. To admit to weakness is the ultimate show of strength – except it is no ‘show’ at all: it’s us at our most authentic.
​
Get tickets to all 5 of these shows, and if we add more Tett Specials you will receive a ticket to those shows too, free of charge with your subscription.
If you are really enjoying yourself GO ALL IN AND GET NEXT YEARS FRINGE! We don't know what the 18 shows will be, we don't know where they will be in Kingston but we know we are having a Fringe! So Join Us now and help us celebrate our 30th year of Theatre (in) Kingston! 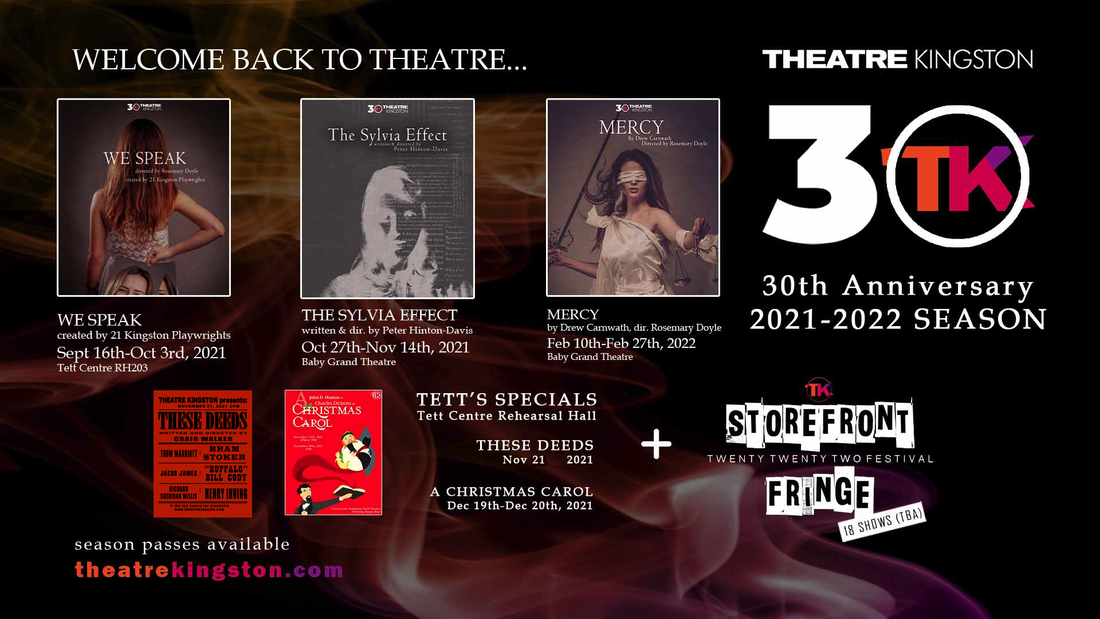 Theatre Kingston acknowledges the privilege it has to be working, playing, and creating on the traditional lands of the Anishinaabe and the Haudenosaunee Territory. By acknowledging the land, we also acknowledge the history of European colonizers who took this land through cruel means and the harsh treatment instigated on the Indigenous people and their culture.